Edit
watch 02:52
Roblox: DeepWoken - The Loop
Do you like this video?
Play Sound 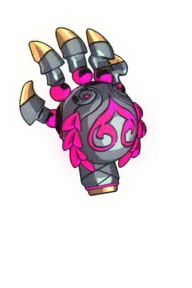 The Twin Fists of Malphon are one of the Infernal Arms that can be unlocked for 8 Chthonic Keys after unlocking the first four weapons.

'...What is a weapon if not the extension of one's will to survive, to destroy? The ancient cyclopean forge-masters who created the Infernal Arms in accordance with the Fates' design must have understood this when they delivered the singular Twin Fists of Malphon in secret to the gods. Any other weapon must be held in hand, but Malphon bonds with its bearer utterly, engulfing them with primal strength and alacrity. It is said even the Olympians hesitated to embrace the Twin Fists, until Lady Demeter, her hands accustomed to tilling the land, stepped forward and accepted the gift. The Titans recoiled from Malphon's relentless attacks, overwhelmed by its fury, unable to defend against it as one might a spear or blade. The Titan Hyperion suffered the worst of it, his undying body pulverized to such an extent that even his legacy was destroyed. I can only imagine that was not the first such legacy brought to ruin; and that each time, Malphon created another, greater legacy in its wake. One to be told and retold for aeons to come.''

The primary attack of the Twin Fists is a set of low damage, but extremely fast, strikes that chain together in sets of five. The special is an uppercut that does more damage and hits twice. One unique feature of the Twin Fists is that there is a separate special attack that can be used as part of a dash, which only hits once but at a higher base damage. Additionally, it receives Dash-Strike damage bonuses as well as Special damage bonuses.

The Twin Fists have 4 Aspects: Zagreus, Talos, Demeter and Gilgamesh. Like all other weapons, each Aspect has 5 levels that can be unlocked by spending Titan Blood. The higher the level of the Aspect, the more effective its improvement is. Reaching the highest level in all Aspects requires 51 Titan Blood. An Aspect will not only change the appearance of the Twin Fists, but will also improve its attacks. The Aspect of Gilgamesh has an unique move-set which changes the fighting style of the Twin Fists.

*Giga Cutter activates with Special Charged text and visual on Zagreus. Charged state does not persist through chambers. Uses the base damage of the special move it is activated by, including Dash-Upper.

**Maim causes the target to take an additional 25% damage and deal an additional 50% more damage to Zagreus. It lasts 4 seconds and deals a Doom-like burst of damage when it expires.

Revealing the Aspect of Gilgamesh[]

Reveal the Aspect of Gilgamesh by meeting the following requirements:

You can see your current chamber number on the upper right corner of your Boons screen. When Asterius is present (you may also get the Dire Soul Catcher), he will be usually be in chamber 30. The door in the chamber leading to his will always have a Boon reward with a skull.

Claws of Enkidu also includes 2 extra dashes with the ability to Dash Rapidly by holding the dash button.