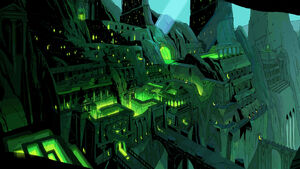 Tartarus, as seen from Zagreus' room

Tartarus is an indoor biome just outside of the House of Hades. It is a maze of dungeons and corridors which holds the souls of those who committed crimes and sins in their lives. The River Styx flows through and around Tartarus, emptying into a pool inside the House of Hades itself. Tartarus is the first biome Zagreus must fight through to escape the Underworld. It consists of 15 chambers.

'...The lowest reaches of the Underworld are reserved not just for the Master's own abode, but for the benefit of every wretch who, in the course of drawing breath, failed every opportunity to leave any sort of positive impression behind. Tartarus is one of the Master's most elaborate designs, constructed not just to contain the wretched dead, but to oppress them, to punish them. The Master has no pity for the wretches, here; he would say they had their chance, and knew the risks of leading hateful lives. Punishment is all that is left for souls such as these; no more chance of rehabilitation, only suffering. Some miserably toil about, while others receive dedicated hands-on treatment, courtesy of the Master's overseers, who ensure Tartarus always retains the reputation that it has.'

Tartarus features three different kind of traps. The first are spike pits on the floor. If an enemy or Zagreus walks on them, after a very short delay, spikes will protrude from the plate, dealing low damage to Zagreus and high damage to enemies.

Tartarus also has barrels of explosives placed in some rooms. When hit with an attack, these barrels will ignite, and explode after a short delay. Any enemies or Zagreus caught in the blast will take high damage (though enemies will take considerably more damage than Zagreus will.) These barrels can only be set off by Zagreus' attacks, and cannot be detonated in any other way.

Tartarus features a unique chamber with the shade Sisyphus, who is tasked with pushing a boulder (affectionately named "Bouldy") up a hill in his chamber. When encountered, Sisyphus will offer Zagreus a brief conversation, and then grant him either Obols, Health, or Darkness. After many encounters Zagreus will eventually be able to gift Bouldy with Nectar, giving Zagreus the Heart of Stone boon in exchange. Sisyphus can only be encountered one time per run, and is not guaranteed to be encountered. Zagreus cannot use Fated Authority on his chamber to swap it to a different reward.

Since Sisyphus's chamber features no combat, it will not count towards Encounters for Chaos boon debuffs, but it will count for Encounters for items from the Well of Charon (but only non-combat ones, like the HydraLite).

Tartarus features three separate mini-boss encounters. Zagreus can encounter only one of them in a run. It is possible to encounter none of them, depending on the paths the player takes.

Each room is marked with an elite skull beneath the offered god boon. There is no way to distinguish between the three encounters without entering one.

The first mini-boss encounter is the Bloodless chamber. In it, Zagreus must fight two Elite Inferno Bombers. This encounter takes place in two possible rooms. One room is a small room with four destructible pillars in it, allowing the player to drop rubble on the enemies to deal lots of damage. The other room is much larger, with an inner ring of platforms surrounding by an outer ring of playable area. This room features a variety of traps in it, with spike pits along the outer ring and four Chimera traps targeting each inner platform.

The second mini-boss encounter is the Wretched Shade chamber. In it, Zagreus must fight a Wretched Shade which teleports around the room after each attack, a melee jab or a fast-flying projectile, and summons Wringer reinforcements from the River Styx to the left and right sides of the room if not taken down quickly. The encounter takes place in a heart-shaped room with two Dashable gaps within each bump and a destructible pillar at its center. The room has two entryways and two exits.

The third mini-boss encounter is the Doomstone chamber. In it, Zagreus must fight a Doomstone which floats above its chamber, firing beams in a radial pattern around itself. The encounter takes place in a square chamber with deep chasms cutting into the chamber's center from the top-left, top-right, and bottom-right.

Tartarus features three different bosses, the Furies. When you reach chamber 14, one of these bosses will be randomly selected to fight. Each boss has their own unique chamber and attacks.

Initially, Megaera will be the only fight the player can experience at the end of Tartarus. After a few attempts, Alecto and Tisiphone will begin appearing.

The reward for this encounter is a Titan Blood Bounty if it is the player's first victory against the Furies, or if they meet the Target Heat from the Pact of Punishment. Otherwise, it is a Darkness drop. By default, this drop is 30

, and is affected by boons and bonus effects.

Once the Fury is defeated and reward collected, the door at the opposite side of the chamber will open, allowing access to a Stairway encounter. This stairway will always lead to Asphodel, the second biome of the game.

For more information on the Furies as the boss of Tartarus, see The Furies.

These are all the enemies that can be encountered in any other Tartarus chamber. These enemies can also appear as Elites, giving them armor and upgraded attacks.