Edit
watch 02:56
Raise a Floppa - The Loop
Do you like this video?
Play Sound 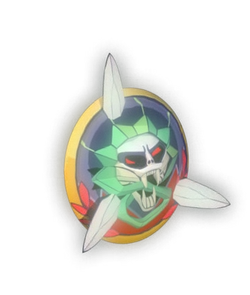 Aegis, the Shield of Chaos is an Infernal Arm that can be unlocked for 3 Chthonic Keys.

'...Aegis, the Shield of Chaos, predecessor to the very Aegis wielded by Lord Zeus and by Athena, his most favored daughter... the Lord of Thunder defended his brothers and sisters using that very shield when, together, they conspired to drive the Titans back into the lowest reaches of the Underworld. The shield was shattered, yet a burning effigy remains, its power still intact. A power sealed within the visage of a monstrous entity even the titans feared. Its might is uncontrollable, and it scarce functions as a manner of defense. Instead, its writhing maw augments its wielder's might, shattering bone and solid rock with little effort, and considerable zeal. I confess I had to look away from it. The family of weapons used to end the Titan-war, the other members of it seem almost alive in their own way; but, there is no almost about this. It instills in me a feeling I would rather leave unnamed. May the next bearer of Aegis meet it on agreeable terms.'

The main attack is a single swing that hits in an arc and knocks enemies back. Holding the attack button will block damage from the front, and releasing will perform a shield bash forwards, dealing damage to enemies hit. The special throws the shield, which bounces between enemies and objects before returning.

It's worth noting that the shield is capable of blocking nearly anything, including attacks from bosses, except for traps and AoE attacks.

The Shield of Chaos has 4 Aspects: Zagreus, Chaos, Zeus, and Beowulf. Like all other weapons, each Aspect has 5 levels that can be unlocked by spending Titan Blood. The higher the level of the Aspect, the more effective its improvement is. Reaching the highest level in all Aspects requires 51 Titan Blood. An Aspect will not only change the appearance of the Shield of Chaos, but will also improve its attacks. The Aspect of Beowulf has a unique move-set which changes the fighting style of the Shield of Chaos.

*Blitz Disc will move through foes until stopping in place for 10 seconds or until Special is pressed again, at which point it travels back to Zagreus. Deals damage every 0.3 Sec., even when travelling back. You can still Attack before the shield is recalled.

Revealing the Aspect of Beowulf[]

Reveal the Aspect of Beowulf by meeting the following requirements: