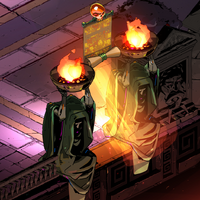 The Pact of Punishment in the courtyard

The Pact of Punishment is a contract provided by Hades for the purpose of making Zagreus' escape attempts even more difficult while earning valuable rewards. In a regular playthrough (save file), the Pact will only appear after the Final Boss is defeated at least once, and Zagreus has claimed victory. When he inevitably returns to the House of Hades, the Pact of Punishment will block the open window in the courtyard, allowing Zagreus to customize aspects of his run before he leaves. In Hell Mode, the Pact is available from the start.

The Pact of Punishment features a total of 15 (16 in Hell Mode) different conditions which can affect an escape attempt. Most of these have differing levels, allowing Zagreus to further increase how effective one condition is.

Each Condition in the Pact of Punishment is worth an amount of Heat. The amount of Heat displayed in the gauge on the left of the Pact's UI represents the "total difficulty" of the conditions chosen.

Choose your conditions for a run carefully. Many of the conditions can be nearly ineffective against one particular weapon build, but extremely difficult to another. The prophecy Harsh Conditions requires you to completely clear a run with each of the conditions in place, but the condition only needs a single rank active in it, and they do not need to be done all on the same weapon or within a single run.

Extreme Measures Level 4 (Extremer Measures) can only be purchased from the House Contractor after the main game is completed and the Final Boss is fought once after that. 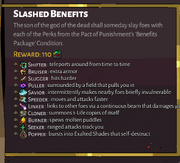 Benefits Package affects armored enemies, granting them one additional perk up to a max of 2 per level. The following perks are:

Also, when Zagreus enters a new biome, Tight Deadline will add the stipulated duration to the timer (rather than previous, when each zone was limited to the stipulated timer). Chambers where Zagreus must survive for a set duration against continually spawning enemies will not appear if Tight Deadline is active.

Although Routine Inspection deactivates Mirror of Night Talents, some effects still remain active. Zagreus remains able to reroll either chamber rewards (Fated Authority) or Boons (Fated Persuassion) – however, he loses the free rolls at the start of the run and can only gain rolls from collecting Chthonic Keys if he has the Fated Keys work order from the House Contractor.

Defeating the Final Boss at certain Heat thresholds (8, 16, and 32) unlocks special rewards - though much to the disappointment of Zagreus (and perhaps also the player), these "rewards" are merely cosmetic statues of Skelly to display in the House of Hades courtyard.

In addition, powering the Pact up to 5, 10, and 15 Heat will allow Zagreus to access the Infernal Gates that lead to Erebus in Tartarus, Asphodel, and Elysium, respectively.

In addition to the rewards above, completing the game with active Heat will award Zagreus with bounties. Each boss slain at (or above) a Target Heat value will drop a Diamond, an Ambrosia or Titan Blood which Zagreus can spend back in the House of Hades. After defeating the Final Boss and achieving victory at the target Heat value, the target will be raised for future bounties.

Bounties and Target Heat are tracked independently per weapon.

Bounties can only be collected once per weapon, per boss, per Heat level. So for example, once a player has defeated the Furies on 3 Heat with the Sword, they will no longer be able to collect a Bounty from defeating them with the Sword until they also defeat the Final Boss. However, the player can still collect a Bounty for defeating the Furies with a different weapon.

You can only claim rewards for the lowest Heat you have not yet completed, even if you defeat a boss at a higher heat (e.g If you have not yet beaten the Final Boss on 2 Heat for the Rail, then you go through and defeat them using 5 Heat, you will claim the remaining rewards for 2 Heat, and your Target Heat for the Rail will go up to 3). The Bounties for 0 Heat are tracked separately, and cannot be claimed by clearing on a higher heat.