Hermes is the Olympian God of commerce, trickery, and travel, as well as the messenger of the gods and conductor of souls into the afterlife (called a psychopomp). He offers boons that enhance Zagreus's speed in various ways. His boons can also improve Zagreus's dash and cast recovery.

If given Nectar, Hermes will give you the Lambent Plume.

Hermes' affinity gauge is maxed out at 8 hearts.

Hermes' favor requires speaking with him while having the Lambent Plume equipped and max leveled to 3*. It does not matter how many stacks of its bonus you have.

'...One of the free-spirited sons of Zeus, he is patron to travelers, traders, even tricksters. Youthful in spirit and appearance, he could be mistaken for a common lad, if not for his extraordinary swiftness. None whom I know approach his agility or athleticism. He puts this peerless skill to a specific use, serving as the messenger of Olympus. Vast distances are nothing to him. Yet, there is something more to Hermes: He is the only god upon Olympus who dutifully serves the Underworld, in addition to his Olympian affairs. The Underworld is an orderly place, but the souls of the dead must first be brought to its brink. He has much to do with this. He seems to have ingratiated himself to the boatman, Charon -- notoriously unapproachable even by the Underworld's own. Thus, it is my belief that Hermes, besides his many talents, is the god of more than he appears.'

For quotes and dialogue regarding Hermes, please refer to Hermes/Quotes. 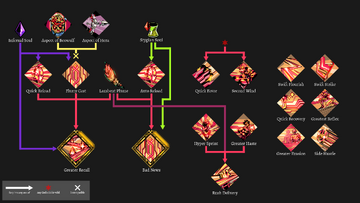 Boons from Hermes function slightly differently to other Olympians. None of his boons occupy Attack, Special, Cast, Dash, or Call slots, as they are designed to be mixed with and support other gods' boons. In addition, none of Hermes' boons can be enhanced with a Pom of Power.

His boons are in a different item pool than other Olympian boons for the purposes of Fated Authority and Charon's shop. His boon can take priority in appearance even if one equips other gods' keepsake. Additionally, his boons will never spawn as the first chamber's reward or in mini-boss encounters. You can only obtain up to three of his boons in one run - with the third only available in Charon's shop in the Temple of Styx or in one of the Temple wings - and he never appears in a Trial of the Gods.

Hermes seems to be the only Olympian God that Zagreus actively interacts with that knows that Zagreus is continually "failing" to get out of the Underworld. How he attained this information is unknown, but could be attributed to his speed and access to Charon on a normal basis. He also states that he is fine with keeping the information secret, possibly due to his "God of Trickery" nature.

Spoiler warning!
This article contains detailed information about Hades that may spoil your enjoyment of discovering the game's secrets for yourself.
Read at your own risk!

A conversation with Skelly will reveal that both he and Hermes are aiding Zagreus' escape attempts at Charon's behest.

Hermes is also privy to the information that Persephone returns to the House of Hades. He asks Zagreus for permission to spread this information as well, keeping the ruse a secret to the remaining Olympians.

For additional information on Hermes that does not pertain to Hades, see Wikipedia's article: Hermes