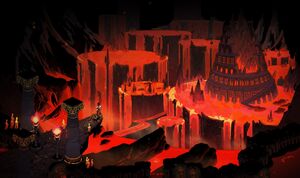 Zagreus standing over the flooded plains of Asphodel

Asphodel, once known as the Asphodel Meadows, is a desolate collection of rocky islands amidst a sea of fire beyond Tartarus. Travel between these islands is done via small bone rafts. Asphodel is the second biome Zagreus encounters during his escape attempts, and is always 10 chambers long; beginning at Room 16 with an overlook of the region and ending at the 25th Chamber in the Stairway Chamber.

Supposedly, the Asphodel Meadows once lived up to their name. They were verdant plains dotted with their namesake flowers in which the unremarkable dead - those who had earned neither punishment in Tartarus nor glory in Elysium - roamed for eternity. At some point before the game's story, the fiery river Phlegethon overflowed, flooding the legendary meadows and reducing them to the magma-filled, barren hellscape seen in-game.

'...Among the many reasons it is best for mortals to strive to treat each other reasonably well is that, after having lived their short lives, they may wind up stuck with one another for eternity in the meadows of Asphodel. There are only several destinations for the vast majority of mortals, after all. The worst are sent to Tartarus; the greatest, to Elysium; and all the others, there. Asphodel is the vastest region of the Underworld, not dissimilar in ways from soaring surface planes, save for the presence of the ever-burning River Phlegethon. Some shades of Asphodel express concern that the river threatens to flood, to engulf the meadows in fire and ash. At the House of Hades we have downplayed the likelihood of this; but we are ill-equipped to deal with the outcome, should it come to pass. At best, we can swiftly relocate the shades who wish to leave Asphodel's outskirts.'

Since Asphodel is a natural biome, traps are more natural hazards and environments. However, the explosive barrels from Tartarus return in Asphodel. These can only be triggered by Zagreus' attacks, and after a short delay, will detonate doing high damage to anything caught within the blast radius (but will do considerably less damage to Zagreus compared to enemies).

In Asphodel, the rivers of magma around the islands serve as the biome's main trap. After a brief delay while standing on magma, non-floating enemies will begin to take damage very rapidly, which increases the longer they stand in it. Zagreus will also take rapid damage in magma, starting at 1 damage per tick and increasing rapidly until death. Dashing or stepping off the magma resets the ticks back to 1. The magma also has a slowing effect on both Zagreus and enemies - though this can be easily countered with a Dash (for Zagreus) or cross-room leap (for enemies). Fireballs will sometimes be spewed out, covering parts of the islands in magma for limited amounts of time.

Additionally, after enough enemies have been killed in Asphodel chambers, smoke vents will open around the room. These occasionally create smoke which obscures the area around them, and blurs the screen of the player should Zagreus step into the smoke. These traps do not affect enemies.

Destructible pillars in Asphodel will drop

in addition to the debris that harms enemies.

Asphodel features a unique chamber with the soul Eurydice, who is encountered in her house singing and baking various desserts. When encountered, Eurydice will offer Zagreus a brief conversation, and then grant him one of three desserts to take with him.

Eurydice can only be encountered one time per run, and is not guaranteed to be encountered. Zagreus cannot use Fated Authority on her chamber to swap it to a different reward.

Since Eurydice's chamber features no combat, it will not count towards Encounters for Chaos boon debuffs, but it will count for Encounters for items from the Well of Charon (but only non-combat ones, like the HydraLite).

Asphodel features three separate mini boss encounters. Zagreus can encounter only one of them in a run. It is possible to encounter none of them, depending on the paths the player takes.

Each room is marked with an elite skull beneath the offered god boon. There is no way to distinguish between the three encounters without entering one.

The first mini-boss encounter is the "Barge of Death" encounter. In it, Zagreus will be assaulted by three waves of various Elite Bloodless, Inferno Bombers, Slam Dancers, Burn Flingers, and Wave Makers. Additionally, these waves will be protected by 1-2 "Dire" Voidstones. The Voidstones in this encounter cannot be Elites. This encounter takes place on a large moving raft that travels over a large section of the river Phlegethon.

The second mini-boss encounter is the Megagorgon chamber. In it, Zagreus must fight both a Megagorgon and a Dire Skull-Crusher. The magma at the edges of the room more frequently spews fireballs onto its floor.

The third mini-boss encounter is the "Witches Circle" encounter. In it, Zagreus must fight against four Dire Spreaders. The chamber consists of a central island separated from four extant islands by a moat of magma. Two pillars offer cover in this chamber from the Spreaders' projectiles.

Asphodel features only one final boss, the Lernean Bone Hydra. This boss will appear at Chamber 24. More details about this encounter can be found on its respective page.

The reward for this encounter is a Diamond Bounty if it is the player's first victory against the Hydra, or if they meet the Target Heat from the Pact of Punishment. Otherwise, it is a Darkness drop. By default, this drop is 60

, and is affected by boons and bonus effects.

Once the Hydra is defeated, a raft will arrive in the top left quadrant of the room, which will escort the player to a Stairway chamber. This stairway leads to Elysium, the third biome of the game.

These are all the enemies that can be encountered in any other Asphodel chamber. These enemies can also appear as Elites, giving them armor and upgraded attacks.

For additional information on Asphodel that does not pertain to Hades, see Wikipedia's article: Asphodel Meadows